Have you ever heard something that seems so logical it must be true? The health world, including nutrition, is full of ideas that have a logical theory behind them, but when the actual biochemical process is studied, the logical theory doesn’t hold up. This is the case when it comes to thyroid function and eating cruciferous vegetables.

Before we dive in, let’s be sure we are all on the same page about what a cruciferous vegetable is. Here is a list of which veggies we are talking about:

These vegetables are packed with necessary nutrients which we need to be eating more of, not fearing.

The Logic of the Myth

A quick Google search of thyroid and cruciferous vegetables will yield a firestorm of differing opinions from the most mainstream medical professionals to self-proclaimed nutritionists to highly-skilled functional medicine practitioners. We are here to set the record straight!

So what is all the fuss about? Decades ago, there arose a concern that if people with hypothyroidism (low thyroid hormone levels) eat cruciferous vegetables, it could further impair their thyroid condition. This concern came from animal studies and has not shown to be true at all in human studies. Dr. Furhman puts it well:

“Concerns about potential negative effects of cruciferous vegetables on thyroid function arose from early animal studies, followed by findings suggesting that certain breakdown products of cruciferous phytochemicals could interfere with thyroid hormone synthesis or compete with iodine for uptake by the thyroid. However, this is only a hypothetical issue. The scientific consensus is that cruciferous vegetables could only be detrimental to thyroid function in cases of very high intake accompanied by significant iodine deficiency”

The research, behind the risk of this powerful group of vegetables has clearly shown for many years now that the only risk is extremely high intake of cruciferous vegetables in the presence of a persistently iodine deficient person. One instance has been documented of an 88-year-old woman eating two to three pounds (!) of raw bok choy every day for several months who developed hypothyroidism.

There are some practitioners who will suspect iodine deficiency in hypothyroidism and test for it to be sure this is not contributing to the thyroid condition, but the levels of vegetable consumption do not need to be altered. Rather, in the presence of iodine deficiency, the iodine level should be corrected with supplementation and high iodine foods.

The Risk of NOT Eating Cruciferous Vegetables

Glucosinolates, mentioned above, are metabolized into isothiocyanates (ITC) which are proven to be protective against many types of cancers including breast, prostate, colorectal, bladder, lung, and thyroid cancer. Each cruciferous vegetable forms a different ITC which gets conjugated into glutathione in the liver. Glutathione in the liver helps the body metabolize and get rid of carcinogens, xenobiotics, and many other harmful substances.

In other words, eating cruciferous vegetables is one of our most powerful weapons against cancer-causing agents and harmful chemicals. This glutathione conversion happens via a class of phase II detox enzymes which basically take harmful substances such as medications, plastics, antibiotics, excess hormones, pesticides, and other harmful chemicals leftover in the body and renders them less harmful by making them water soluble and able to be excreted in the urine and bile.

It is important to recognize how important this process is to the body. We are exposed to so many more chemicals today than in the past and most people have a difficult time getting rid of them sufficiently. Therefore, to have a food source that initiates and supports this process is incredibly beneficial.

Here are other ways that ITCs from cruciferous vegetables support the body:

As beneficial as the ITC conversion is to our body’s detoxification pathways, the way vegetables are processed and prepared affects the ITC conversion process. Myrosinase is an enzyme necessary to convert ITCs into the protective substances like glutathione. This enzyme can be deactivated by cooking vegetables too long or waiting too long after harvest to consume. More information is available regarding cooking methods than there is about time from harvest, but it has been determined that steaming less than five minutes is the only cooking method that preserves enough myrosinase for ITC conversion. Therefore, an Overland Park KS thyroid doctor recommends eating this family of vegetables raw as much as possible.

If you have been wary of eating cruciferous vegetables because you have hypothyroidism, you can rest assured the science behind the theory does not add up. The only group of people at risk are those eating excessive amounts of this family of vegetables and who are also severely iodine deficient. The benefits of this family of vegetables are vast and powerful. Other great news about cruciferous vegetables is they are easily accessible. Virtually every country in the world has access to some of these vegetables, if not all of them.

Different veggies have different levels of glucosinolates so if you are particularly interested in getting the most protective benefit, here is a guide: 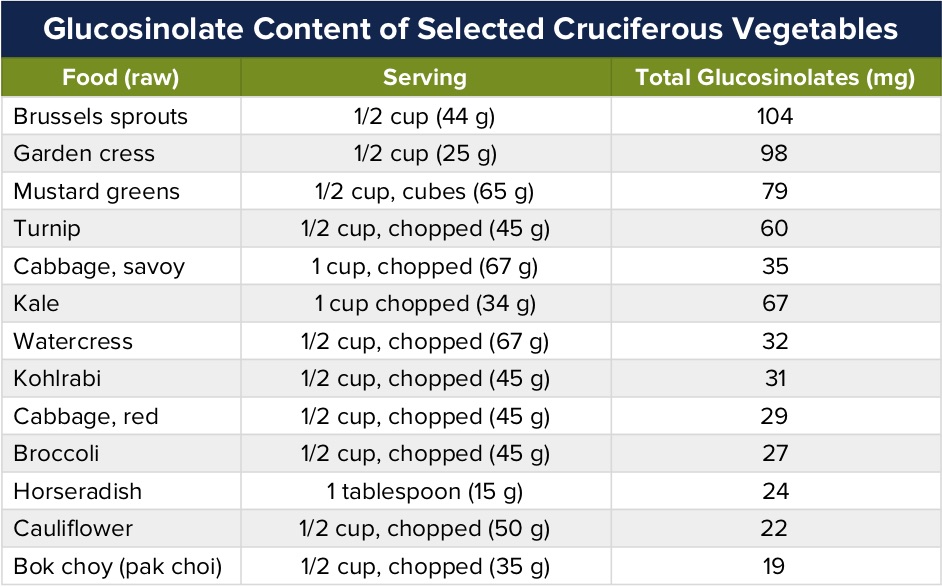